Today, we have a guest post from Jeff Selingo, author of “There Is Life After College,” which comes out on April 12th.

Nearly 40 percent of American workers hold a bachelor’s degree. College graduates are found in virtually every profession. Some 15 percent of mail carriers have a four-year credential, as do one in five clerical and sales workers, as well as, 83,000 bartenders.

Getting a bachelor’s degree is what going to college means to most Americans and is so ingrained in our culture that students who don’t march along are often admonished, questioned  and considered failures.

The decades-long march to college-for-everyone at 18 has actually closed off rather than opened up options for teenagers and twentysomethings.

As recently as the 1970s, a teenager had a number of options after graduating from high school: get a good-paying job right away, enlist in the military, find an apprenticeship in a trade or go to college.

A teenager today really has only two of those options still available: the military or college. Less than 1 percent of Americans serve in the military, so most go to college right after high school. In the early 1970s, less than half of high school graduates in the United States went on to college the following fall. Today, nearly 66 percent do.

The goal of universal college has actually done more harm than good because it banished anything that smacks of job training to second-class status.

Don’t get me wrong: I’m not encouraging 18-year-olds to skip out on further education after high school. But not everyone is ready for a traditional American college experience at 18, nor does it align with the interests, skills, and mindsets of some teenagers.

We need more than just one pathway to good jobs in the U.S. What we need is a place like Harvard—both prestigious and rigorous—that will attract students who have talents and interests to pursue skilled jobs critical for the economy that don’t necessarily require a four-year college degree.

As I traveled the country the last two years talking to employers of all sizes and in all sectors of the economy for my forthcoming book, what I heard most is the worry they have about filling so-called middle-skill positions in advanced manufacturing, healthcare and information technology.

Nearly half of the American workforce has these jobs today, but many of them are filled by aging Baby Boomers who will soon be retiring. It’s expected that as many as 25 million of all new job openings in the next decade will be for middle-skills jobs.

Employers told me they have a healthy supply of talent for their white-collar office jobs that usually require at least a bachelor’s degree and sometimes a master’s or Ph.D. But if manufacturing has any hope of making a rebound in the U.S., there is a desperate need for younger workers with technical, hands-on skills that require training after high school. 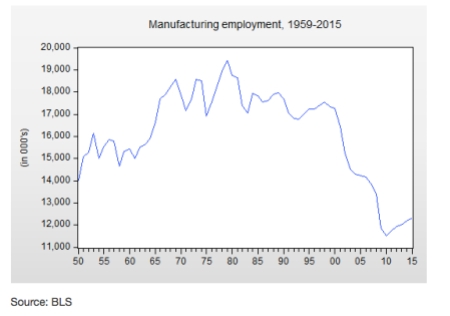 Today, only 52 percent of young people have either a two- or four-year degree or an industry certificate by the time they reach their mid-twenties. The goal of universal college has actually done more harm than good, because it diverted attention away from any real discussion of a robust apprenticeship program, and it has banished anything that smacks of job training to second-class status.

There is evidence attitudes are beginning to change. First, the number of apprenticeships is rising for the first time since the 2008 recession. Second, with college debt surpassing the trillion-dollar mark, students and parents are giving apprenticeships a second look as an alternative to paying sky-high tuition for a bachelor’s degree that might not lead to a job. Third, some apprenticeships are beginning to have an academic component that makes them nearly indistinguishable from traditional colleges.

The modern version of what an apprenticeship could look like for American students interested in alternatives to college is on display at the Apprentice School in Newport News, Virginia. Students who choose from one of more than 20 occupational areas are paid an annual salary of $54,000 by the final year of the program—$10,000 above that of the average bachelor’s degree recipient—and afterward they are guaranteed a job with the military contractor that operates Newport News Shipbuilding.

The school is just as selective as Harvard. It receives more than 4,000 applications each year for 230 spots, and significant numbers of its graduates go on to earn bachelor’s or master’s degrees. In many ways, it looks and feels like a typical American college, except in one important respect: its students graduate debt free.

We need more such schools and pathways post-high school that serve a greater array of industries as well as students who don’t want to travel down the one route we offer to them now.

Jeffrey Selingo is author of three books on higher education. He is a regular contributor to the Washington Post’s “Grade Point” blog, a professor of practice at Arizona State University and a visiting scholar at Georgia Tech’s Center for 21st Century Universities.

In There Is Life After College, Jeff Selingo explores why students struggle to launch into a career after college and how they can better navigate the route from high school through college and into the work world. It will be released by HarperCollins April 12